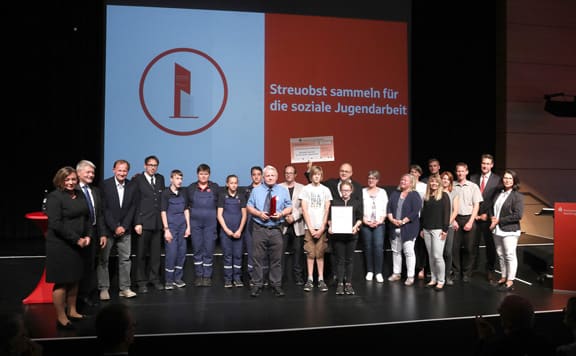 “The aims of the back garden orchards collection project are bringing generations together as well as bringing children and teenager closer to nature” says Heinz Reichert, voluntary coordinator of the project.
The project was honored with prize money at the amount of 2.500 Euro during a ceremonious awards show.

Back in autumn 2018 children and teenager visited back garden orchards in the region around Winnenden and collected apples which had fallen down to the ground. By the end of September the groups of apple collectors picked 40 tons of apples which had been taken over by Ernteband afterwards – as already done the years before to support the project financially.

Mayor Norbert Sailer: “This citizens’ price is a great honor, it brings us power to move on over the next years to keep our nature and environment.”